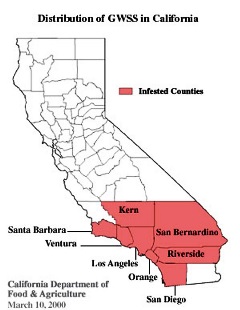 A new threat to California's crops and ornamental plants has been spreading in the southern part of the state since 1990, and has now become established in Kern County. This threat is the glassy-winged sharpshooter (GWSS), Homolodisca coagulata. GWSS vectors the pathogenic bacterium which causes Pierce's disease of grapes and leaf scorch of almonds and oleander, as well as diseases of many other crop and ornamental plants. Recent movement of the vector into Temecula wine grape production areas has led to the death of many grapevines due to Pierce's disease.

The insect is one of the largest sharpshooters found in California. At about 12 mm (1/2 inch) in length, it is twice as large as other common species. Overall it is brown to blackish in color. The eyes are yellow with dark speckles and the abdomen is yellow and black. Egg masses are usually laid in the leaves of various plants but may also be deposited in the rind of citrus fruit, making it unmarketable.

GWSS often produces copious amounts of liquid when it feeds. Known as "sharpshooter rain," this liquid wets host foliage, sidewalks, and streets and can leave a white residue on citrus leaves and fruit.