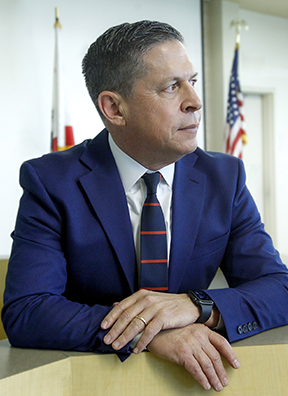 Ron Freitas is the 42ndDistrict Attorney of San Joaquin County.

As the Chief Deputy District Attorney of Homicide and Gang Divisions, he assisted in the investigation, charging determinations, and supervision of 150 murder prosecutions, including the kidnap, rape, and murder of eight-year-old Sandra Cantu (2009), the Dalene Carlson kidnap and murder (2011), and the Bank of the West bank robbery felony-murders (2014). In 2012, he successfully argued to the California Supreme Court that autopsy reports are not testimonial in People v. Dungo (2012) 55 Cal.4th 608.

In 2012, he was appointed as a Board Member to the Lodi Unified School District and was re-elected in 2016 and 2020.   Ron served 10 years on the Board and was elected President of the Board for 2015-2016 and 2020-2021. He was an active member of the San Joaquin County 2x2 Committee and the Legislative Committee. He was a co-founder and co-chairman of the LUSD Board Safety Committee and was a member of the Superintendent’s Budget Advisory Committee.

In 2016, Ron was president of the Yes on Measure U campaign committee in which voters approved the issuance of $280 million in bonds for new construction and renovations in Lodi and North Stockton schools. He is a Past President of the Giving Opportunities to Kids Foundation (GOT Kids, 2019-2020), which raises over $50 thousand annually for underprivileged children to attend science camp and have a fuller educational experience. He was also a member of the California School Boards Association and the San Joaquin County School Boards Association.

Ron has been named the San Joaquin County Probation Officers Court Employee of the Year for 2018 and 2022. He is a graduate of University of the Pacific, McGeorge School of Law, where he was a member of the Pacific Journal Law Review, and California Polytechnic State University, San Luis Obispo.